Order of Magnitude (A Fish Story)

I am some kind of kooky obsessive about geothermal energy. It comes from over twenty years of experience explaining the chronic false claims of ground source heat pumps by the U.S. Department of Energy and others.

Sometime in November-December 2017 I learned climate science untruthers have repeated the untruth that geothermal energy (or any "recent" or local natural variations in geothermal energy) could be contributing to the stipulated warming of the Earth. I read two webpages at Skeptical Science (https://www.skepticalscience.com/heatflow.html and https://skepticalscience.com/underground-temperatures-control-climate.htm). Both pages easily debunk the untruth (they term it a "myth") and both link to a website which mentioned the "massive heat inside the Earth" in November 2011 (after the dates on the September 2011 Skeptical Science webpages) and included it with the following nonsense. As a bonus it says it might have started with nuclear tests.


... There are other possible causes which could be associated with 2,000 underground nuclear tests (causing damage to the crust which allowed more heat to escape from the liquid core of the Earth) or related to small variations in the temperature of the core itself, which is about 5,400 degrees C.

This may help you to understand the process:  even just 100 metres underground the temperature is very stable over the course of hundreds of years.  As you come closer to the surface you will observe slight variations between summer and winter, but not much.  Of course you will see daily variations just a few centimetres down, but, overall, the stable temperatures underground (which have been established over billions of years primarily as a result of heat generated underground) will tend to control climate.  You can draw an analogy with a small glass of water in a large air-conditioned room.  The temperature of the water (representing the oceans and land surfaces) will be controlled by that of the air which represents the far greater thermal energy in the rest of the Earth under the surface.

The true effect of geothermal energy on the temperature of the surface of the Earth has been published for about 200 years. Joseph Fourier described it this way in 1824, when he wrote his paper "to invite attention to one of the most important questions of natural philosophy, and to present general views and results."


In a globe of iron the increase of a thirtieth of a degree per metre, would only give a fourth degree of actual elevation of temperature at the surface. This elevation is in direct ratio to the conducting power of the substance of which the crust is formed, all other conditions remaining the same. Thus the excess of temperature, which the terrestrial surface has at present, in consequence of this internal source, is very small; it is probably below the thirtieth of a centesimal degree, (1/15° Fahrenheit.) We ought to remark that this last result can be applied to all suppostions which can be made upon the cause, whether it be regarded as local or universal, constant or variable.

By the end of December I hadn't found any geothermal climate science untruths other than reported by Skeptical Science in 2011, so I tweeted this: 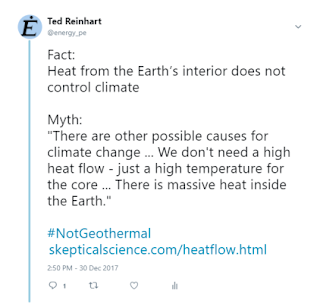 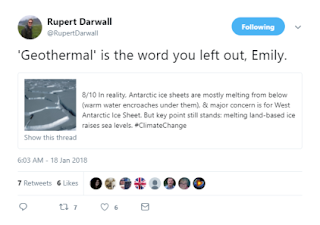 I replied to myself, quote-tweeting Rupert Darwall's quote-tweet of a climate scientist. Then on 2018-02-06 I came across a tweet linking to another climate untruther's profile on desmogblog.com and remembered to find Rupert Darwall there. I replied to myself, quote-tweeting him again, tagging @DeSmogBlog, tagging the climate scientist he'd trolled, and comparing him to Doug Cotton (responsible for the http://www.climate-change-theory.com nonsense I quoted above). I also replied to my new reply with a link to Rupert's desmogblog.com profile. A couple of hours went by, and then he nibbled at my bait:

I "liked" his reply, took screenshots in case he deleted them, and made him wait while I worked on a reply I didn't think I'd need. Rupert Darwall is a twitter fish who is two orders of magnitude bigger than me but I knew he was an untruther and was screaming a fringe untruth to his followers. I wondered if I cast the same geothermal lure he'd be enough of a dunce to hit it harder, not knowing my bait was 100% rock and metal. I gave him a chance to walk it back, writing him the truth, giving him a link to the 1837 translation of Joseph Fourier's 1824 paper, and dropping his climate scientist target from the conversation. He typed, "You're being obtuse." I replied, "Where was the word 'geothermal' left out, Rupert?" and again quote-tweeted his creepy 2018-01-18 quote-tweet of the climate scientist's tweet. He replied, "google my CEI paper," getting my hook in his mouth a little bit.

I found his paper and his writing under the heading "West Antarctic Meltdown" made me throw up in my mouth a little bit. He'd referenced some interesting articles he didn't seem to comprehend. I replied with one example of how he'd confused ice shelf with ice sheet, tagging the authors and publishers he'd quoted. I again asked him if he thought geothermal energy affects climate. He replied by changing the subject and asking what I thought caused the "blowtorch" quoted in a New York Times article he'd used. Had I set the hook? I replied, "No one knows," and asked him again where 'geothermal" was left out of the climate scientist's tweet. I left my rock and metal hook dangling in the water and ran errands.

While I was gone, Rupert replied asking a vague question about geothermal energy. My hook was set and I wasn't watching! Fortunately, Justin Gillis, who'd written the New York Times article Rupert had used in his CEI paper, saw my line moving in the water and cast his own reply. I liked his reply not only because he's a better fisher than me; the bonus was he immediately invoked ORDER OF MAGNITUDE which I can't do without pushing my glasses up the bridge of my nose. Does Rupert Darwall understand orders of magnitude? It doesn't matter. He swallowed my rock and metal hook and rudely engaged Justin Gillis after he'd been kind enough to point out Rupert was off by at least an order of magnitude: 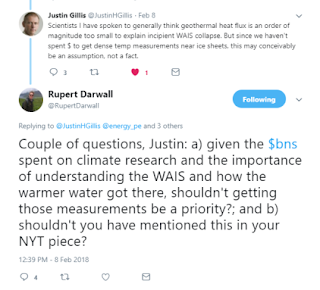 If you scroll down the replies, you'll see how Mr. Gillis watched Rupert swallow more hooks, then netted him, and tossed him on the dock. Then he asked Dr. Eric Steig if he had time to demonstrate his practiced technique for quickly cleaning geothermal zombie fish. He did, and he did. Some say this was his most fundamental tweet of the thread: 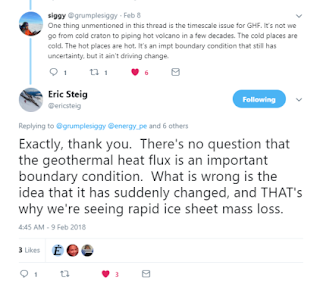 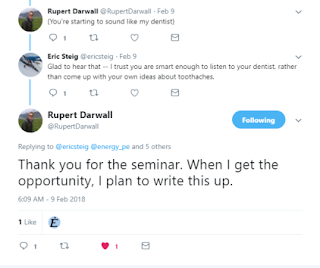 I took the opportunity to write this up for you, Rupert. No plan really, just fishing.

New comments are not allowed. 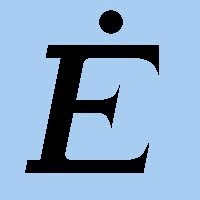